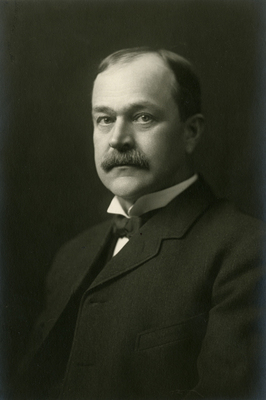 Portrait of Henry Archibald Tobey. Dr. Tobey was born in 1852 in Union County, Ohio. He was educated at Ohio Wesleyan University and the Miami Medical College of Cincinnati where he studied medicine. After he graduated in 1875, he partnered with Dr. Henry Conklin and worked as a general practitioner in Columbus, Ohio, until 1877, when became the assistant physician at the Columbus Asylum for the Insane with Dr. Richard Gundry. He remained there until 1880 when he was elected Superintendent of the Dayton Asylum for Insane. After four years he decided to return to being a general practitioner, but he didn’t remain there long, as he was soon made Superintendent of the new Toledo Hospital where he stay until 1891. He was reelected in 1892 and stayed Superintendent until he retired in 1906. He died two years later in August, 1908.

Courtesy of the Ohio History Connection