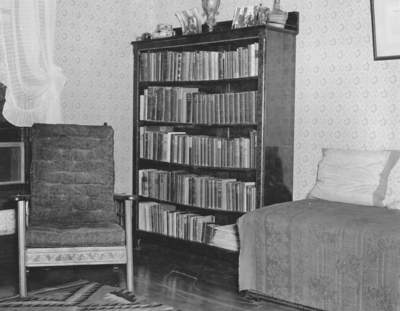 Photograph of a bookcase and other furniture at the Dunbar House, ca. 1938. This home, at 219 N. Paul Laurence Dunbar Street in Dayton, Ohio, was the final home of poet Paul Laurence Dunbar. After Dunbar's death in 1906 his mother, Matilda Dunbar, continued to live in the house until her death in 1934. In 1936 the Dunbar House became the first state memorial to honor an African American.

Courtesy of the Ohio History Connection