Because the general public is beginning to encounter molecular genetics during the course of their everyday lives with things like genetic screening, genetically modified food, and stem cell research, among others; scientific literacy in molecular genetics is becoming increasingly important in society today. Two learning progressions have recently been published by Roseman, Caldwell, Gogos & Kurth (2006) and Duncan, Rogat & Yarden (2009). Our study aims to test the upper bounds of the Duncan et al. (2009) progression in three different classroom contests using 10th graders and supplying teachers with molecular genetics intervention units. These units differ from normal classroom instruction by introducing proteins before DNA and targeting instruction to components of the Duncan et al. (2009) progression. We found that student performance before instruction fell on the low end of the progression, but student achievement increased in all three contexts after instruction. Several students were able to give level 3 (highest level in the learning progression) responses in multiple components of the progression after instruction. Several intermediate student ideas were also found and could be added to revise and refine the progression. Additionally, students were able to reason in all three models of genetics simultaneously both before and after instruction, although integrating the models remained a challenge even after instruction.

This poster was presented at the National Association for Research in Science Teaching Annual Conference in Chicago, IL in April of 2013. 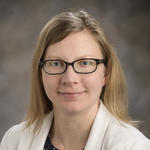