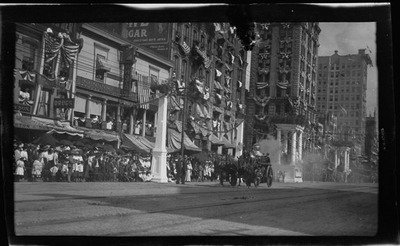 A Dayton Fire Department steam pumper fire engine is being pulled by three horses racing down Main Street in the exhibition fire run during the 1909 Wright Brothers Homecoming Celebration. Three firefighters are riding on the engine that is heading north on Main Street toward the Soldier's Monument. Smoke is billowing out of the top of the engine and obscuring some of the view in the background. The engine was from company two which was located at Webster Street and Ford Street. The engine is an American LaFrance 1300 g.p.m. double extra piston engine and cost $5,400.00 new. The photograph was taken facing the Triumphal Arches on the corner of Third Street and Main Street. The engine is headed into the decorated Court of Honor which was located on Main Street between Third Street and the Soldier's Monument. Soldiers from the Second and Third Regiment of the Ohio National Guard are standing in the street waiting to be reviewed after the fire exhibition. Lining the side of the street are spectators watching the exhibition. Behind the spectators are a number of Dayton businesses including the Anderton and Son Jewelry Store at 18 North Main Street, John C. Good Drug Store at 16 North Main Street, Benjamin F. Hershey Law Offices and E. Grant Koontz Real Estate Offices at 14 North Main Street, Adolph Grossman Photography and the Montgomery County Mutual Insurance Company at 12 North Main Street, and the J. S. Horner Piano store at 10 North Main Street. Near the top of the image is large billboard that reads, "Straiton and Storm's Owl Cigar now five cents Henry Straus, Distributor, Cincinnati, Ohio". In the balcony, under the Grossman Photography sign, are small signs for balcony chairs, tickets in room 1, and choice seats for sale. Further in the background is a sign for the Wm. H. Ahlers Fur Store located in the Teutonia Bank Building on the northeast corner of Main Street and Market Street. The steeple, on the far right of the background, is the English Lutheran Church at the southeast corner of Main Street and Hanna Lane. Starting from the right side of the image are the Church, the United Brethren Building (northeast corner of Fourth Street and Main Street), the Conover Building (southeast corner of Third Street and Main Street) and the Callahan Bank Building (northeast corner of Third Street and Main Street).