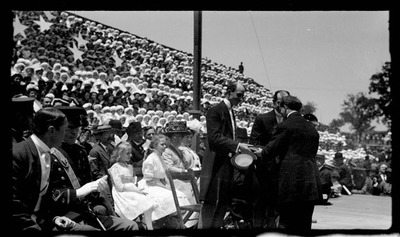 Wilbur and Orville Wright are accepting City of Dayton Medals from Mayor Edward E. Burkhart, during the 1909 Wright Brothers Homecoming Celebration medals ceremony held on the morning of Friday June 18, 1909 at the Montgomery County Fairgrounds. On the far left of the image, J. Sprigg McMahon is leaning forward and Lieutenant Frank P. Lahm of the United States Army Signal Corps is to the right. Seated behind Wilbur Wright are Leontine and Ivonette Wright, the daughters of Lorin Wright. Katharine Wright is to the right of Ivonette, followed by Ivonette Stokes Wright, the wife of Lorin Wright. Behind Leontine and Katharine are Wilbur Landis and Frank Gilbert. Landis and Gilbert were members of the Ten Dayton Boys Club, who were invited to sit on the stage as distinguished guests of the Wright family during the ceremony. In the grandstands, school children are clothed in red, white, and blue to form the United States of America flag.