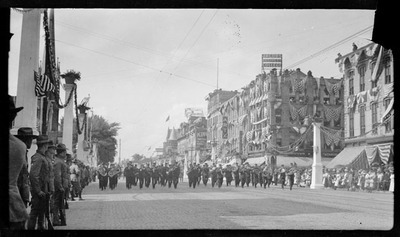 Heidelberg's Celebration Band is marching in the Dayton Fire Department parade during the 1909 Wright Brothers Homecoming Celebration. The sixty piece band, directed by John V. Lytle, was the lead band for each of the parades and events at the celebration. Musical instruments being played are tubas, trombones, a snare drum, baritones, French horns, trumpets, and a sousaphone. The band is marching south on Main Street from the Soldier's Monument in the decorated Court of Honor, which ran from the Monument to Third Street. Soldiers from the Second and Third Regiment of the Ohio National Guard are standing on the street and were reviewed after the fire exhibition. Behind the soldiers and decorations is the steeple for the First Baptist Church. On the opposite side of the street, spectators are gathered to witness the event. Behind the spectators are a number of Dayton businesses including the Jacobs Business College at the northeast corner of Second Street and Main Street, G. W. Shroyer and Co. Sporting Goods Store at 106 North Main Street, W. N. Artz Furniture Store at 110 and 112 North Main Street, King Brothers and Company at 128, 130, and 132 North Main Street, and Green, Green and Co. Bakery at 136 North Main Street. Near the center of the background is the corner of Steele High School and the Soldier's Monument.