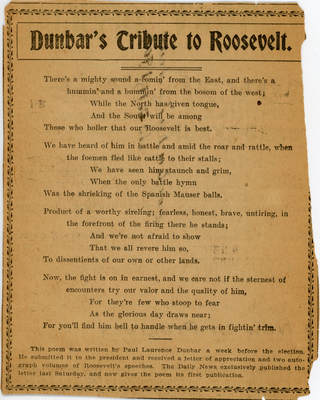 This item is a newspaper clipping of "Dunbar's Tribute to Roosevelt," a poem about President Theodore Roosevelt, published in the Dayton Daily News on November 10, 1904.

The clipping reads as follows:

There's a might sound a-comin' from the East, and there's a
hummin' and a bummin' from the bosom of the west;
And the South will be among
Those who holler that our Roosevelt is best.

We have heard of him in battle and amid the roar and rattle, when
the foemen fle little cattle to their stalls;
We have seen him staunch and grim,
When the only battle hymn
Was the shrieking of the Spanish Mauser balls.

Product of a worthy sireling; fearless, honest, brave, untiring, in
the forefront of the firing there he stands;
And we're not afraid to show
That we all revere him so,
To dissentients of our own or other lands.

Now, the fight is on in earnest, and we care not if the sternest of
encounters try our valor and the quality of him,
FOr they're few who stoop to fear
As the glorious day draws near;
For you'll find him hell to handle when he gets in fightin' trim.

This poem was written by Paul Laurence Dunbar a week before the election. He submitted it to the president and received a letter of appreciation and two autograph volumes of Roosevelt's speeches. The Daily News exclusively published the letter last Saturday, and now gives the poem its first publication.