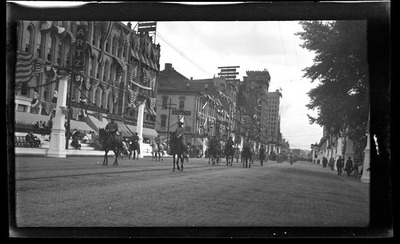 Ohio National Guard officers and soldiers, from the Second and Third Regiments, are marching in the review during the Wright Brothers Homecoming Celebration -- 1909. The soldiers, under the command of Colonel H. G. Catrow, are heading north on Main Street from Third Street in the Court of Honor. The officers, riding on horseback, are in the lead; then the Third Regiment band from Sidney, Ohio; followed by marching soldiers. Spectators line the street to watch the review. Behind the spectators are many signs for local Dayton businesses including the G. W. Shroyer sporting goods and automobile Store at 106 North Main Street, W. N. Artz Furniture Store at 110 and 112 North Main Street, and a sign for live lobster. In the background near the soldiers on foot is the Callahan Bank building with a clock tower. The building was located at the northeast corner of Third and Main Streets. Next to the Callahan building is the Conover building at the southeast corner of Third and Main Streets, followed by the United Brethren Building at the northeast corner of Fourth and Main Streets. In the foreground are decorations used in the Court of Honor.