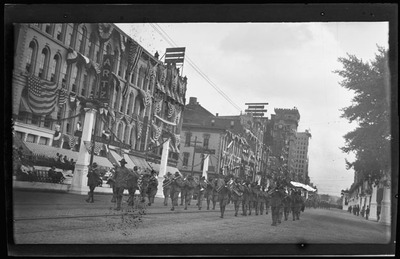 The Second and Third Regiments of the Ohio National Guard, under the command of Colonel H. G. Catrow, were reviewed by Governor Harmon and Mayor Burkhardt on Thursday, June 17, 1909 during the Wright Brothers Homecoming Celebration. This image shows the Third Regiment Band, from Sidney, Ohio, marching north on Main Street from Third Street during the review. The Band is lead by the Drum Major, followed by soldiers playing trombones, tubas, baritones, cornets, French horns, and clarinets. Behind the band are soldiers marching on foot. Spectators line the street to watch the review. Behind the spectators are many signs for local Dayton businesses including the W. N. Artz Furniture Store at 110 and 112 North Main Street and G. W. Shroyer Sports and Automobile Store at 106 North Main Street. In the background near the soldiers on foot is the Callahan Bank building with a clock tower. The building was located at the northeast corner of Third and Main Streets. Next to the Callahan building is the Conover building at the southeast corner of Third and Main Streets, followed by the United Brethren Building at the northeast corner of Fourth and Main Streets. Both the United Brethren and Conover Buildings had spot lights on top used to light evening events. Throughout the image are decorations that adorned the Court of Honor which stretched from Third Street to the Soldier's Monument on Main Street.