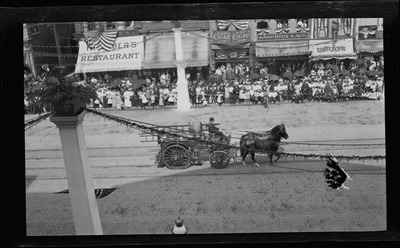 A Dayton Fire Department combination wagon is being driven in the fire department parade at the 1909 Wright Brothers Homecoming Celebration. The driver is the only firefighter on the horse drawn wagon that is loaded with ladders, hose, and other equipment. The wagon was from company thirteen. The exhibition fire run took place on Main Street starting at Sixth Street and ending at the Soldier's Monument and passed through the entire Court of Honor. Soldiers from the Second and Third Regiment of the Ohio National Guard are standing in the street waiting to be reviewed after the fire exhibition. Lining the side of street are spectators watching the exhibition. Behind the spectators are signs for Dayton businesses including the Kiefaber's Restaurant at 24 North Main Street, Kramer, Voit, Co. at 22 North Main Street, Geo. C. Albert's Cigar Store at 20 North Main Street, Anderton and Son Jewelry Store at 18 North Main Street, John C. Good Drug Store at 16 North Main Street, and Benjamin F. Hershey Law Offices at 14 North Main Street.