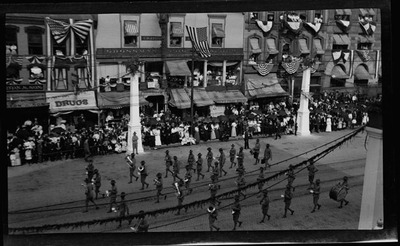 The Second and Third Regiments of the Ohio National Guard, under the command of Colonel H. G. Catrow, were reviewed by Governor Harmon and Mayor Burkhardt on Thursday, June 17, 1909 during the Wright Brothers Homecoming Celebration. This image shows an overhead view of the Third Regiment Band, from Sidney, Ohio, marching north on Main Street from Third Street during the review. The Band is lead by the Drum Major, followed by soldiers with musical instruments. In the first row are soldiers with trombones, the second row is made up of tuba and baritone players. The next row shows a cornet, baritone and two French horns. The fourth row is comprised of cornets, followed by a row of clarinets and a saxophone, and two rows of clarinets. The last row includes a bass drum and a snare drum. Written on the side of the bass drum is, "Third Regt O.N.G. Band Sidney. O." In the background, spectators can be seen lining the streets and sitting in the widows of the buildings. Behind the spectators are many signs for local Dayton businesses including the Anderton and Son Jewelry Store at 18 North Main Street, John C. Good Drug Store at 16 North Main Street, Benjamin F. Hershey Law Offices at 14 North Main Street, Adolph Grossman Photography at 12 North Main Street, Francis M. Thompson Law Offices at room 10, 12 North Main Street, and J. S. Horner Piano Store at 10 North Main Street (with a piano in the crate in front of the store). Throughout the image are decorations that adorned the Court of Honor which stretched from Third Street to the Soldier's Monument on Main Street.