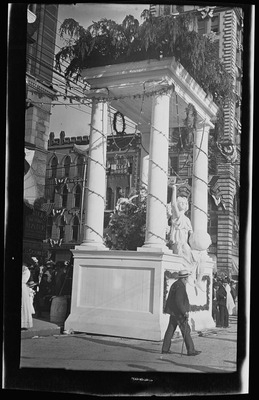 The image shows the Court of Honor of the 1909 Wright Brothers Homecoming Celebration in downtown Dayton, Ohio. The Court of Honor was located on North Main Street from Third Street to the Soldier's Monument and was decorated with lights, garland, flags, and flowers. At the beginning and end of this section were four large triumphal arches, sculpted by Joseph A. Horchert, with columns in between. The sculpture, depicting the "Goddess of Victory," is of a seated woman holding a model of the Wright Flyer raised in her right hand and supporting a globe in her left hand. Horchert worked with Henry Kabierske who designed most of the decorations for the event and worked for Fischer and Sons, of Philadelphia. The triumphal arch shown is at the north east corner of Third and Main Street and spectators are seen observing the piece. In the background, is a sign for Winters National Bank. Below the bank sign is one for M. J. Schwab and Co. Cigar Store at the Hotel Beckel. Both signs are on the Callahan Bank Building which was located at the northeast corner of Third Street and Main Street. The building across the street is the Conover Building located at the southeast corner of Main Street and Third Street. On the Conover Building signs for the W. L. Douglas Shoe Store at the southeast corner of Third Street and Main Street, the John W. Miller Drug Store at 6 East Third Street, and the Deweese-Bidleman Co. at 8 East Third Street.