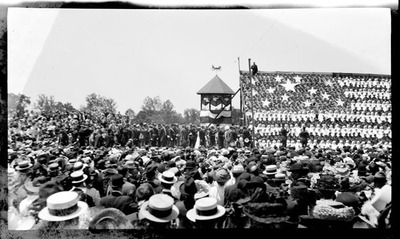 The opening presentation during the 1909 Wright Brothers Homecoming Celebration medals ceremony held on the morning of Friday June 18, 1909 at the Montgomery County Fairgrounds. The image is shot from a distance and shows the crowds that witnessed the event. In the grandstand, school children are clothed in red, white, and blue forming the United States of America flag. Standing in front of the children are two musicians from the Heidelberg Celebration Band playing cornets. Standing center stage is Wilbur and Orville Wright. To the right of Orville is Bishop Milton Wright, Ivonette Stokes Wright, the wife of Lorin Wright, Milton Wright, the son of Lorin Wright, Lorin Wright, Horace Wright, the son of Lorin Wright, and Reuchlin Wright with his back to the camera. To the left of Wilbur Wright is Lieutenant Frank P. Lahm of the United States Army Signal Corps, J. Sprigg McMahon, the event coordinator, General James Allen of the United States Army Signal Corps, and Judson Harmon the governor of Ohio.