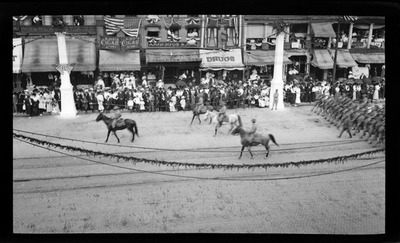 This is a blurred image of the Ohio National Guard review during the Wright Brothers Homecoming Celebration held on June 17, 1909. The soldiers, under the command of Colonel H.G. Catrow, are from the Second and the Third Regiments. They are marching north on Main Street from Third Street in the Court of Honor and are lead by officers mounted on horseback. Spectators line the street to watch the review. Behind the spectators are many signs for local Dayton businesses including J. S. Horner Piano Store at 10 North Main Street, John C. Good Drug Co. at 16 North Main, Anderton and Son Jewelry Store at 18 North Main, Geo. C. Albert's Cigar Store at 20 North Main, Kramer, Viot and Co. at 22 North Main, and Kiefaber's Restaurant at 24 North Main. In the foreground are decorations used in the Court of Honor.